Context
Protected areas are considered to be a key instrument for conserving biodiversity, but they face mounting pressures. For many decades they have been established under an “island” paradigm, where areas of high natural value are isolated and totally protected from land-use change and human intervention. Now many of these areas are becoming more isolated as the surrounding landscape is further dominated by intensive agriculture and urban development. Their existence may not be supported by local people, especially if they are denied use of the area and excluded from management decisions. There is an increasingly strong call to move to a combined social-ecological approach, where biophysical and human components are linked and protected areas are integrated into the spatial planning of the surrounding landscape. Under this model, the ecosystem service approach is integrated within conservation programs and both the intrinsic value of nature and its functional value to humans are considered. This case study is located in the Mediterranean Basin, in the only two national parks of Andalusia: Doñana (a coastal wetland in south-west Spain) and Sierra Nevada (a mountain range in south-east Spain). Both share important ecological and cultural values associated with unique ecosystems, endemic species, Mediterranean cultural practices and ecosystem services. This study analyses livestock practices in depth, as an example of how traditional practices involving local breeds of sheep, goats, cattle and horses are considered and managed within the conservation plans of protected areas. The case study focuses on livestock practices which have 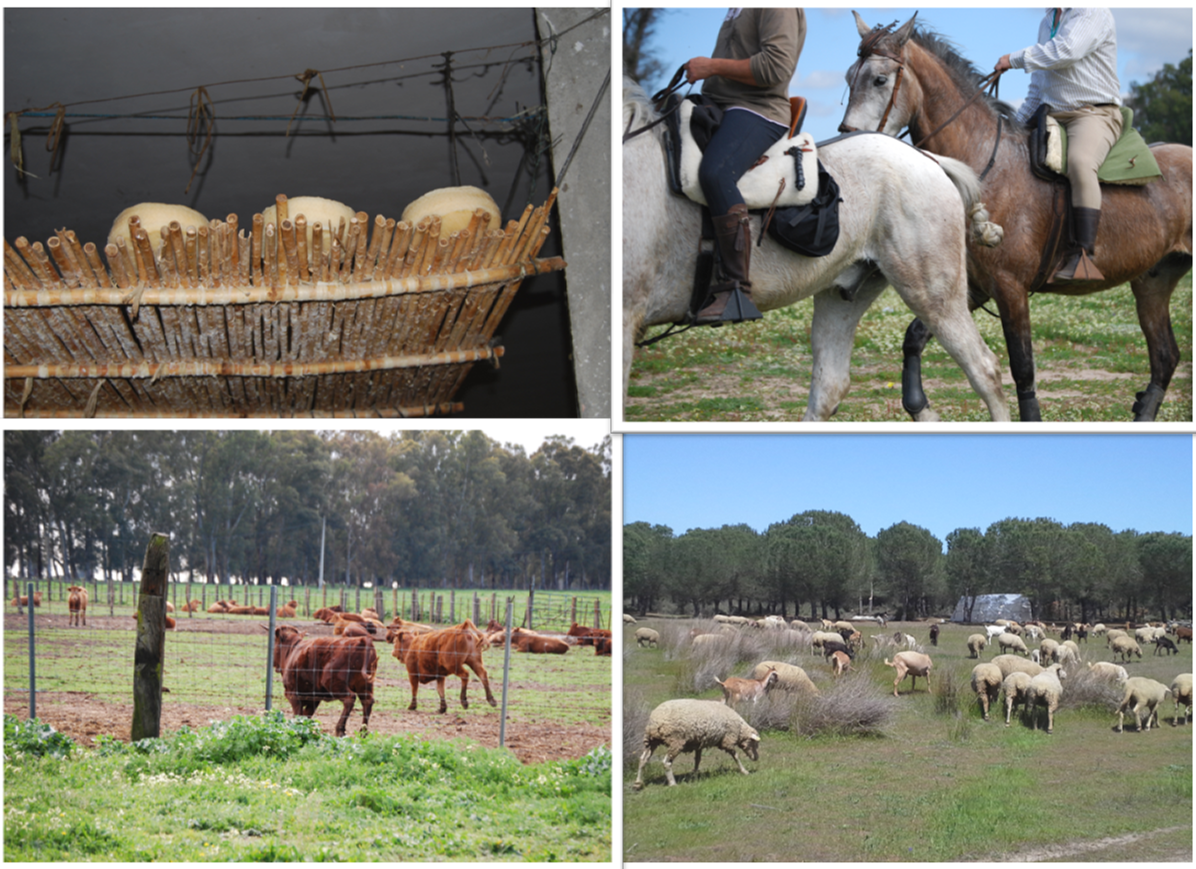 been conducted since ancient times and are responsible for a rich heritage in terms of landscapes, agro-biodiversity, ethnological values and traditions (Illustration 1). They are also a source of income through the sale of produce and because of their attractiveness for tourism. Management of livestock which is not balanced, particularly overgrazing, could result in negative impacts on vulnerable ecosystems and species, or animal health problems. Hence, there are different views and perspectives on how livestock practices should be integrated with conservation goals, how far those goals should also promote local development, and whether livestock practices could actually contribute to conservation policies.

Arguments
Overall, we identified 34 arguments from more than 10 documents (policy documents, sustainable development plans, sectoral plans, or media coverage as newspapers) that were developed during the period 1993-2013.
The different arguments relate to: (1) supporting livestock practices because of the ecological, economic and cultural benefits of this activity, (2) how to create a suitable management plan which includes norms and principles for establishing sustainable livestock activities, and (3) the needs, complaints or concerns of the livestock sector (see Figure 1).
In Doñana the situation started with very opposing views that gradually converged, particularly since implementation of the Sectoral Plan. In Sierra Nevada, however, different parties supported common arguments from the beginning. This could be related to the interdependency between conservation and rural development in Mediterranean mountains. In this context, protected area managers understand that shepherds play a key role in conservation, while shepherds consider that the protected area helps them promote or improve their economic activity. The only point of disagreement in Sierra Nevada is related to the conservation of local breeds of livestock, as conservationists want to preserve them but shepherds are concerned that these breeds will not be competitive. In fact, many of the arguments are related to the socio-economic needs of the sector in terms of how to be more profitable, and how to improve resources through knowledge and innovation. All parties support these goals.
For both areas, ecological arguments were important, in particular those related to the capacity of livestock breeds to support biological communities and maintain landscapes. The results show that traditional livestock is not just perceived as an economic activity: it has the potential to promote ecosystem service delivery, particularly through managing habitat for native species, maintaining a gene pool of livestock breeds, seed dispersion, erosion control, prevention of natural hazards, encouraging nature tourism and building local ecological knowledge (see Figure 1). 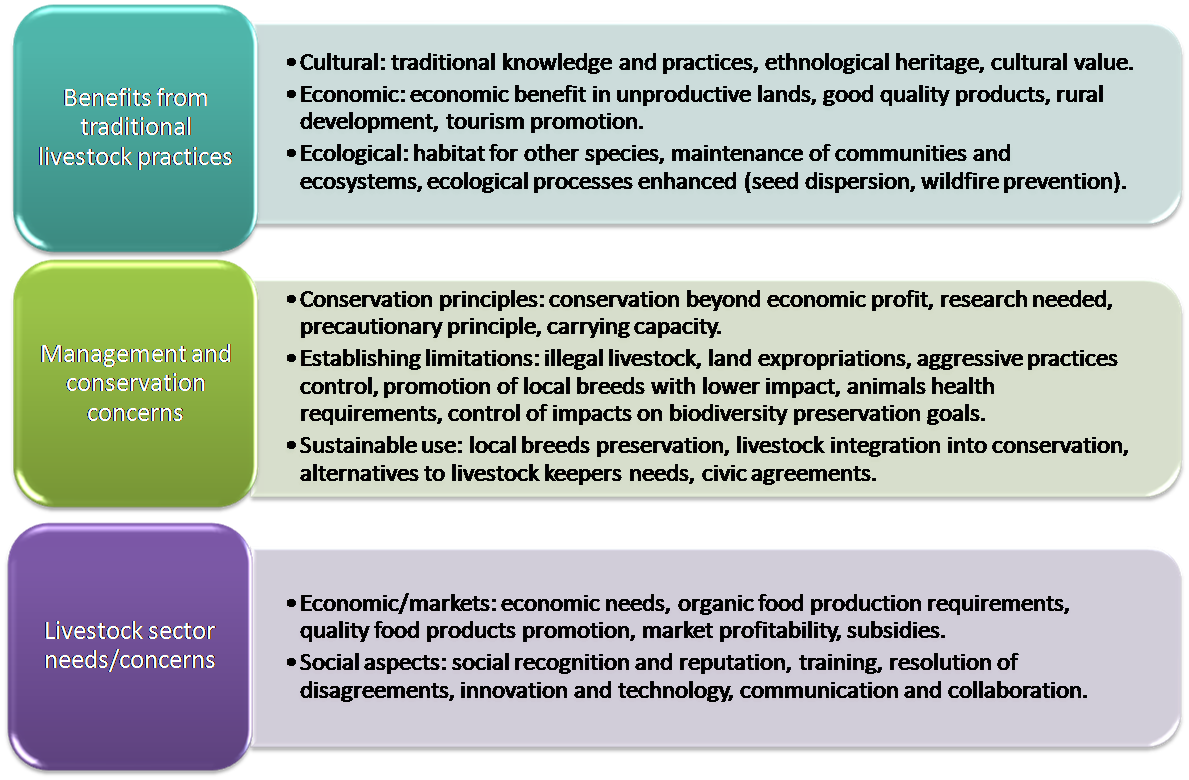 Figure 1. A summary of the main arguments related to the integration of traditional livestock practices into conservation strategies identified through document analysis.

The arguments used in Sierra Nevada had a strong association with the promotion of employment and economic solutions to the development of municipalities in the high mountains. However, arguments related to management issues were also important. For example, overgrazing can cause negative effects for the maintenance of erosion control or conservation goals. Such arguments covered issues such as the conservation of wild species and agro-biodiversity, the carrying capacity of ecosystems, and conflicts between livestock keepers and conservationists. Some lessons have emerged from the first livestock management conflicts in Doñana during the 1990s. These include the need for more participation and communication with local people, as well as social recognition of the role of shepherds in conserving biodiversity. In addition to the document analysis, the main argumentation lines used by different parties were explored through face-to-face interviews with 31 key stakeholders using Q analysis, where interviewees are asked to rank a list of arguments depending on how much they agree with them. Results showed six different discourses on how livestock should be integrated into conservation plans. In general terms they can be described as follows: (1) conservation primacy, (2) towards sustainable development, (3) organic production, (4) towards conservation with public participation, (5) livestock as a source for rural economic and social viability, and (6) livestock as a source of ecosystem services. From these discourses two major views can be distinguished (Figure 2). The first was represented by arguments 2, 3 and 5; and highlights the importance of including social and economic criteria in conservation policies. These discourses support the sustainable management of livestock practices (and were used by decision-makers, managers, researchers and producers in both protected areas), but also promote the rural viability of the local population, for example, with measures such as enhancing organic production (particularly highlighted by decision-makers and managers in Sierra Nevada). In addition, they support improving the image of the natural protected area through the use of the concept of sustainable activity in the marketing of products derived from livestock production (stated by all stakeholder groups in both protected areas).

Figure 2. A simple graphical representation of the relationships between discourses (following their correlations in the Q study interviews) and the main stakeholders supporting them.

The second major view (representing arguments 1, 4 and 6) relates to how conservation principles should be addressed in the management of the protected area, but also emphasises that public participation and communication is essential. Both, researchers and decision-makers/ managers support public participation (see Figure 2). Producers highlighted the importance of livestock in the delivery of ecosystem services, with a focus on finding common ground between conservationists and producers. And finally, decision-makers and researchers highlighted the primacy of conservation. Under this argument, protected area managers assume that livestock practices should be integrated in some way into management programs, but they always have in mind that conservation goals go beyond economic profit. This argument is more salient in Doñana, where the main economy is more diversified and based on other uses (i.e. fishing and intensive agriculture). In this sense, livestock practices should be carefully regulated to avoid potential damages to biodiversity conservation.  This is an argument that has been accepted since the areas have been “protected” because of their ecological values. It has a high persistence and diffusion in the media and as a consequence it has the capacity to convince the general public, in particular tourists.

Framing
As presented in Figure 2, the different arguments and discourses could be framed or articulated around two principal and related goals. One is linked with the promotion of conservation goals within protected areas through a plural view. Under this perspective, conservation goals include public participation, as well as the development of traditional livestock practices with ecological, cultural and economic values. The second one is related to how to manage traditional livestock practices in a sustainable and profitable way for rural viability.

Processes
Arguments based on ecological principles have persisted over time, which is consistent with the protected status of both areas. In this sense, one of the main arguments maintained by protected area managers is the need to respect the carrying capacity of the land, together with the aim of fostering conservation beyond economic profit, and avoiding negative impacts on biodiversity. Although information on ecological impacts was lacking for many years, the precautionary principle was sustained by protected area managers and scientists. Gradually the cultural values of livestock practices originally held by shepherds and keepers have started to enter mainstream thinking on protected areas management. In this regard, arguments related to cultural importance (mainly in Doñana, such as traditional knowledge and practices) and economic importance (mainly in Sierra Nevada, such as its role in rural development) have increased.

Effectiveness
Arguments related to the maintenance of environmental sustainability were highly effective. These argue that conservation should be the first goal in protected areas. For example, the density of livestock should respect the carrying capacity of ecosystems inside the park, implemented through zonal planning. This will provide a balance between livestock activity and the biological cycle of the vegetation (protecting it from, for example, erosion problems).

Furthermore, it seems that agro-biodiversity has been recognised as important. Native livestock breeds, sub-varieties and ecotypes (agro-biodiversity) constitute an important genetic heritage to be conserved. It is now widely recognised that conservation and management plans need to take into account the preservation of local breeds such as the Andalusia feral marsh horse, Mostrenca cattle, Churra Lebrijana sheep, and Pajuna sheep.

Other highly effective arguments are those recognising that traditional livestock activities are compatible with conservation goals. These state that multifunctional landscapes (i.e. including traditional livestock farming) should be promoted in Mediterranean ecosystems due to their cultural relevance, and that traditional knowledge and practices are key to designing the sustainable management and conservation of protected areas. Finally, the economic benefit of livestock practices is also a major argument (especially in Sierra Nevada), as these practices constitute a source of employment and a way of maintaining population in rural and mountain areas.

Transferability
The findings of this study could be applied to the conservation of other areas, especially in the Mediterranean region, where it is important to balance cultural and socio-economic values, such as those associated with traditional farming, with ecological goals.

The study findings are also widely applicable in contexts where the presence of a natural protected area may result in social conflict with local people. Our results demonstrate the importance of public participation in conservation plans: when knowledge exchange and collaboration is active among different actors, a process of co-learning, trust and co-management is more guaranteed.

Looking for more information on effective arguments for biodiversity?
For more BESAFE results, including separate briefs focusing on other case studies and various aspects of argumentation, see http://www.besafe.pensoft.net.

This brief is a result of research carried out under the BESAFE project. It was written by Dr. Marina García-Llorente, Lorena González, Dr. Paula Harrison, Dr. Pam Berry, Dr. Berta Martín-López and David García del Amo.   Further information is available in Part III of Deliverable 4.1 of the BESAFE project (http://www.besafe.pensoft.net/files/DOWNLOAD2/BESAFE_D4.1_PartIII_Final.pdf)