Context: Targeting sustainable urban community development
The Helsinki Metropolitan Area of Finland is one of the fastest growing urban regions within the European Union. In 2009, the Finnish Government passed a motion to annex an area of 30 km2 in the rural municipality of Sipoo to the city of Helsinki. This caused Sipoo to radically change direction in its land-planning and development. The Sipoo 2025 Local Master Plan was drawn up together with an expansion strategy for the municipality. The strategy was a direct response to the overall development objectives for the Helsinki Metropolitan Area. This case study focuses on the ensuing land planning and development processes of a 26 km2 rural area in Sibbesborg, in southern Sipoo, about 30 km east of Helsinki. A strong characteristic of the area has been its nature-rich and scenic landscape. The area has a varyied topography with a coastal border in the south, large forest areas in the west and north and old cultural landscape in the east and northwest. The Sipoonjoki River crosses Sibbesborg and is protected as a Natura 2000 site. There are also other valuable nature sites within the area, as well as the Sipoonkorpi National Park to the north. With the new development, the spacious living amid fields and forests traditionally enjoyed by the local population of about 3,000 people has to give way to more urbanised conditions linked to the overall metropolitan structure. In 2011, to launch the ´Local Master Plan´ for the new development of Sibbesborg, the municipality of Sipoo hosted an open international planning competition to design a sustainable community for up to 70,000 residents and workplaces. The competition and its scope were based on the existing Sipoo 2025 Master Plan and expansion strategy. Local and global sustainability objectives were taken as a starting point and a panel of local and international experts in different relevant fields was formed to set the targets. One of the five targeted themes, “Unique Environment and Landscape”, targeted biodiversity (BD) and ecosystem services (ES) directly, while some specific ES were dealt with under the themes “Unique Eco- and Energy-Efficiency” and “Unique Ways of Living and Unique Lifestyles”. In addition to the group of experts, the variety of different actors involved in the planning included local land planners, architects, municipal government representatives and policy makers and also the competition award-winning companies. All interested parties had the opportunity to participate in the process in several workshops and through a web application open to an international audience. In addition, a collaborative planning week and exhibitions of both the competition entries and first drafts of the local master plans for Sibbesborg gave local residents an opportunity to discuss them with the planners and express their views. 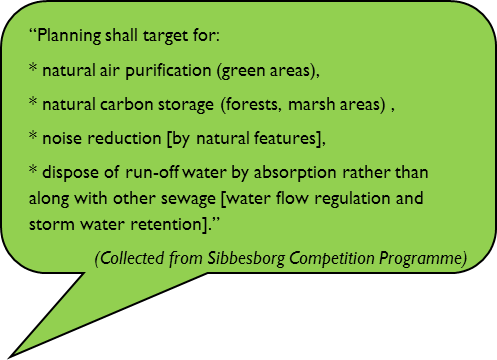 Arguments in different phases of planning process
The case study focuses on the use and persistence of arguments involving BD and ES during the course of the planning process. It does not examine in detail arguments expressing conflicting points of view or how such arguments were framed. Three phases of the planning process were identified and used to track arguments: Phase 1, Initial target-setting (2010-2011); Phase 2, Competition submissions (2011-2012); Phase 3, First new development plan (2013) documents. Official planning-related documents produced in each of these phases were examined to identify all arguments related to BD and ES – but not necessarily using these terms. Arguments were grouped into four categories: (1) BD, (2) provisioning ES, (3) regulating and maintenance ES, and (4) cultural ES. The occurrence and persistence of arguments in the different groups were then analysed. In addition, arguments were classified according to the common framework of all case studies in the BESAFE project (see BESAFE Deliverable D1.1, Report on the classification of arguments and the provisional framework).

Processes: Persistence of arguments through the planning process
Prioritization of BD and ES related arguments was quite clearly formulated and justified in Phase 1, the target setting stage. However, in the following two phases of development (competition evaluations and the first official planning documents), BD related arguments tended to be weaker than the ones for urban development and, therefore, did not always persist in the process. There were signs of argumentation moving partly from protection to utilisation of BD. 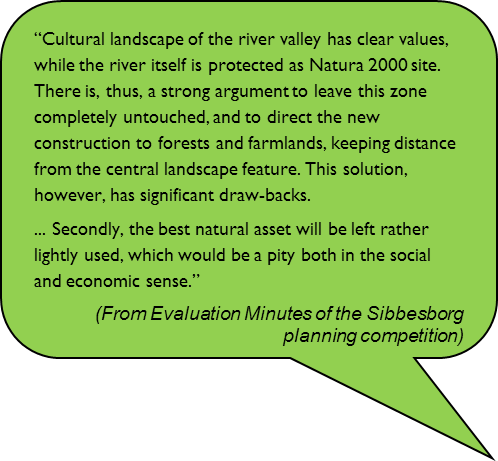 Based on the competition submissions, the concept of ES had not yet been taken up or used by those working in the landscape planning domain. However, a focus on some of the individual ES persisted in the planning process – although they were not identified or referred to as ES. Analysis of the Phase 3 first official planning documents revealed that the concept of ES was still not clearly understood. Indeed, a return towards the more traditional land planning approaches to dealing with environment was observed as the planning progressed, leading to an overall loss of innovativeness and the potential opportunities that the recognition of ES may have provided.

Effectiveness of arguments
The most persistent and effective ES-related arguments were the those that had already been traditionally dealt with in urban land use planning but not recognised as under the concept of ES. These included recreational opportunities provided by green space and water areas, and local food for economic viability and local livelihoods, as well as the well-being of future residents. BD-related arguments were partly taken into account by preserving large forest areas as “untouched” entities. However, the most valuable nature areas of the Sipoonjoki River (Natura 2000 site) and Sipoonlahti Bay with fjord-like coastal landscape were deliberately sacrificed for intensive urban development. The environmental impacts of the draft local master plan have been assessed in a later stage to find out if the natural values of the Sipoonjoki River will be threatened by the planned new development. Based on the assessment, no harmful consequences on the quality of water are anticipated. However, construction and the increasing water traffic that will follow from the large increase in users of the river might have unexpected impacts on the water habitats. This remains to be seen.

Transferability: Improving the persistence and effectiveness of arguments within the land-planning domain
The Sibbesborg case study demonstrates that BD and ES arguments may be useful within urban land planning situations, but that their profiles need to be enhanced to match their effectiveness against established land development thinking. To enable better argument effectiveness in future land planning processes in Finland and also elsewhere in Europe, planners and decision-makers would need to have access to practical information on:

What seems to be the most important prerequisite for applying the ES approach is a true willingness and courage to do something new and deliberately move beyond the more traditionally followed land planning and land architectural principles.

Looking for more information on effective arguments for biodiversity?
For more BESAFE results, including separate briefs focusing on other case studies and various aspects of argumentation, see http://www.besafe.pensoft.net. This brief is a result of research carried out under the BESAFE project. The brief was written by Leena Kopperoinen. The full report is available on www.besafe.pensoft.net. The BESAFE project is an interdisciplinary research project funded under the European Community’s Seventh Framework Programme, contract number: 282743. http://www.besafe.pensoft.net/ Leena.Kopperoinen@ymparisto.fi