Context
The UK Biodiversity Action Plan (UKBAP) has been the backbone for coordinating action to conserve biodiversity across the UK since 1994. A key component of this has been the development of Local Biodiversity Action Plans (LBAP), often aligned with key local political boundaries. Although national policy has shifted towards more integrated perspectives, local biodiversity actions plans with identified species and habitats important for conservation often still provide a central focus for action locally.

This case study examined effective argumentation within the Greater Manchester Biodiversity Action Plan (BAP) area as one of the largest metropolitan areas in England encompassing a number of different local authority areas and with a well established biodiversity action plan.  Nine argumentative interactions were examined involving a biodiversity practitioner (the arguer) and at least one other stakeholder as the intended audience (the receiver). These ranged from local authority planning officers to  private developers, funding officers and involved interactions within teams, between different teams and organisations. These interactions therefore included different stakeholders and involved different local socio-political and ecological conditions. Arguers and receivers were interviewed and key documents relating to the process and/ or outcome of the nine selected argumentative interactions were examined.

Arguments
Within the nine argumentation interactions examined 27 different reasons to act (or premises) were identified (see Table 1). Some of these highlighted important habitats and species identified in national and local polices including the LBAP, emphasizing legal obligations and duties to implement policies to conserve biodiversity. Others highlighted environmental, social or economic issues as reasons to act.

Table 1: The reasons to act identified in arguments and their different framings 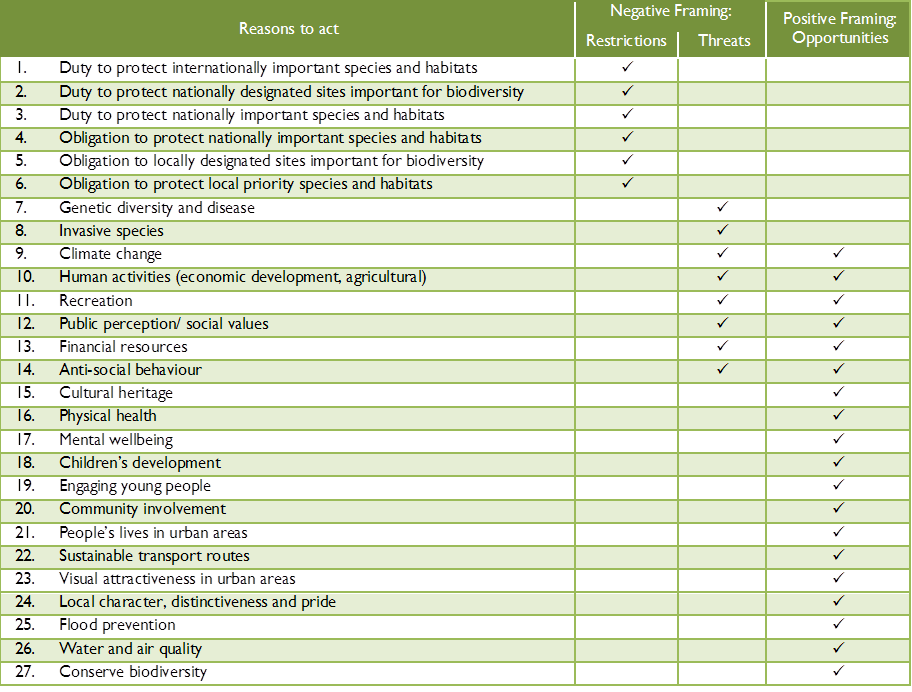 Framing
Framing can signal what is important in an argument and how to respond to it [1]. In this way framing can influence the type and quality of negotiated outcomes, for example by emphasising negative or positive aspects of choices and actions [2].

Three different frames were identified from the reason to act provided in arguments by the arguers (Table 1): (i) negative framing, highlighting restrictive aspects such as legal duties and policy obligations, (ii) negative framing highlighting threats and problems for biodiversity that should be avoided or mitigated (iii) positive framing highlighting opportunities and emphasising the benefits or advantages of taking action. Importantly, identifying these different frames revealed that the same reason could be framed as either a threat or an opportunity. For example, a reduction in financial resources or an opportunity to use resources more efficiently; pressure from recreation or the benefits of improved recreation.

Positively framed reasons were more prominent in arguments relating to action in urban contexts and relating to action to develop ecological networks at a landscape scale, where multiple interests come together. Although all of these arguments proposed actions to conserve biodiversity, the positive benefits for the conservation of biodiversity were not always explicitly provided as reasons to act. This omission is likely to reflect a clear understanding of the interaction by the arguer. Specifically, this may involve two opposing dimensions: 1.) The arguer knows the receiver shares a common concern to conserve biodiversity (it is implicit) but other concerns (reasons) are important to emphasise to help turn this concern into action, for example legal duties or public support; or 2.) The arguer consciously decides to highlight concerns which more closely align with the goals of the receiver (signalling relevance and the benefits of taking action). This suggests that others factors may also be important in the use of arguments in practice.

Process
This case study did not set out to examine the development of arguments over time. However arguers did highlight the importance of timescale in a number of interactions. Specifically, this highlighted the importance of time to build relationships and therefore understanding between arguers and receivers. However, longer time frames could also reduce the relevance and credibility of arguments as goals and policies evolve.

Relevant arguments: The case study highlighted the importance of matching the reasons to act provided in an argument to the goals of the receiver. This indicates the importance of understanding the wider goals of the receiver in developing effective arguments. A good example is conserving cultural heritage, which was provided as a reason to act in an argument targeted at a receiver with this as an important goal.  This is similar to developing win-win solutions and may be more easily identified when positive framing for reasons within arguments is used.

However the receiver often had more than one goal that may be less apparent or immediate. This means that it may be useful to bundle different reasons together which may increase the broader relevance of arguments.

However, the importance of understanding synergies and potential conflicts between the goals of the receiver was also highlighted as important when selecting and bundling different reasons to act. . For example, the receiver may have a goal to maintain and increase political support from local people. The receiver may also have a goal to use resources more efficiently. However, resource efficiency as a reason to act may be unpopular with local people and may have negative consequences for the receiver’s goal to maintain and increase political support. Thus, a more effective argument may involve reasons to act which highlight opportunities to use resources more efficiently alongside opportunities to provide benefits for local people.

Credible arguments: Examining credibility highlighted the importance of consistency between the reasons provided in an argument and local and/or national policy frameworks. This was especially important in arguments that were not relevant to the receiver’s goals, for example in situations where there was little or no benefit perceived by the receiver for accepting the argument and following the proposed action [4]. Thus, in these interactions effective arguments involved reasons highlighting the duties and legal obligations to implement these policies, restricting the activities of the receiver in order to conserve biodiversity.

Policy frameworks do however change and such changes can either strengthen or weaken the credibility of an argument, particularly in interactions spanning medium or longer term timeframes (such as months to years). This was identified as a particular issue in interactions within planning development processes.

The use of evidence to back up reasons provided in an argument and the perceived trustworthiness of the arguer were also found to contribute to the credibility and therefore the effectiveness of arguments in practice. Different types of evidence were identified in the case study. This included a letter of support from local people and photographs showing  the outcomes of  proposed action in similar situations. Furthermore, in urban areas where receivers had multiple goals, the action proposed related to trial sites and small scale action, this demonstrated positive outcomes and therefore at a later date provided evidence for the action to be scaled up to other areas. However, evidence could also be used to back up receivers challenges to arguments.

A number of argumentative interactions examined in this case study involved arguers and receivers who had an existing professional relationship. This was identified as contributing to the effectiveness of an argument if the arguer was a trusted source of information. An existing relationship between arguer and receiver may also result in better understanding of goals and shared concerns, thus potentially contributing to the selection of more relevant arguments.

Transferability
This case study highlights that a focus on selecting relevant and/ or credible arguments as well as focusing on developing relationships with potential argument receivers can contribute to more effective argumentative interactions. Thus, a key message from this cases study is that a mix of soft, bottom-up and hard, top-down approaches are important for  selecting and using effective arguments for biodiversity in practice. This mix will vary but understanding the different dimensions involved in the use of arguments can help increase their effectiveness in practice.

This brief is a result of research carried out under the BESAFE project. This brief was written by Esther Carmen & Juliette Young from the NERC Centre for Ecology and Hydrology at www.ceh.ac.uk.