Context
An ‘invasive alien species’ (IAS) is a non-native species whose introduction or spread have been found to threaten biodiversity and ecosystem services, and that may also have a negative impact on human health or the economy.

Invasive alien species are often regarded as one of the major threats to biodiversity, but this claim is also repeatedly contested. There are great uncertainties in predicting and assessing ecological effects of IAS and, importantly, there are great differences in negative and also positive assumptions of value underlying the judgment of any particular alien species as being beneficial or detrimental in its ecological role and place in biodiversity conservation.

A number of policy initiatives aimed at controlling IAS have appeared. The Convention on Biodiversity (CBD) Article 8h, aims “to prevent the introduction of, control or eradicate those alien species which threaten ecosystems, habitats or species”. The Council of Europe, under the Bern Convention, published a “European Strategy on Invasive Alien Species” in 2004 [1]. The European 2020 Biodiversity Strategy Target V is directed against IAS: “By 2020, Invasive Alien Species and their pathways are identified and prioritised, priority species are controlled or eradicated, and pathways are managed to prevent the introduction and establishment of new IAS” [2].

The European Commission recently published a Regulation on the prevention and management of the introduction and spread of invasive alien species [3]. The impact assessment retained the option that included an obligation to eradicate quickly any newly establishing IAS of European Union concern, and share information. The proposal is for three types of interventions: prevention; early warning and rapid response; and management. A list of invasive alien species of European Union concern will be drawn up with Member States using risk assessments and scientific evidence. Legal implementation is still vigorously debated.

For this case study, arguments were collected from peer-reviewed papers on ecology and nature conservation which were found to justify a positive or negative value judgement on IAS. We analysed which of these arguments were taken up in documents related to the EU policy on invasive alien species which were relevant to the development of the EU regulation on the prevention and management of the introduction and spread of invasive alien species. In addition, we conducted interviews with stakeholders from nature conservation, agriculture and forestry from EU and national level (Belgium, Germany and Hungary) to determine which of the arguments are relevant to policy.

Arguments
As invasive alien species are defined by their properties of being non-native and being harmful two groups of arguments are analysed that reflect these: First, which arguments are used to establish that non-native species are or are not included as part of appreciated biodiversity in EU member states (arguments on general acceptance)? Second, how is the issue of harm addressed by arguments (arguments on adverse effects)?

In general, policies against IAS need not only refer to alien species which already have become invasive but can also target those which might become invasive. At times even a “guilty until proven innocent” perspective is advocated which regards all alien species as potentially harmful until there is evidence that this is not the case. Because of the conceptual, evaluative and political linking of the attributes “alien” and “invasive” we discuss arguments referring to both attributes here.

Concerning naturalness, alien species by definition cannot contribute to a pristine natural state as alien species were introduced by humans. However, it is sometimes argued that an established alien species can be part of naturally evolving ecosystems

Non-native species can contribute to cultural value, e.g., as testimonials of historical garden styles [4] or they can be appreciated as an indicator of present cultural processes, e.g., by being a by-product of a sustainable land use. But they can also be regarded as detrimental to the identity of cultural, often extensively used landscapes (e.g., homogenization of landscapes, loss of sense of place) (see quotation in balloon). Non-native species can have an effect on the species and habitats (for example by enhancing or reducing species richness). And they can also have considerable economic costs, including costs for their eradication or management. There may be also adverse effects on human health (e.g. common ragweed (Ambrosia artemisiifolia) as a cause of allergies). 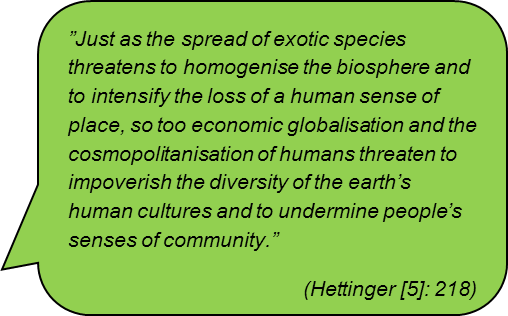 Framing
The arguments outlined here have very much to do with issue framing. The decision to pick only potentially harmful species from all alien species to qualify as IAS itself narrows the scope. Whether an alien species is regarded as good or bad depends on how naturalness, cultural values, and other impacts are perceived: The evaluator´s viewpoint thus frames the selection of arguments.

However, framing can also influence the selection, interpretation and presentation of empirical findings. Examples drawn from the scientific literature show how both opponents and proponents of IAS try to shape the “reality” of IAS in terms of their establishment and degree of threat to biodiversity.

Arguments against invasive alien species are often conveyed implicitly by using a value laden language. Even scientific papers talk of a “threat” to species or ecosystems. But threat is a clearly value-laden term. For example, one would not say that pathogens are threatened by human activity. Metaphorical language often serves to frame arguments. Military language (“battle against invasive species”) is frequently used in the talk on IAS. Similarly, the process of a species becoming invasive is often described as an act of trespassing and overcoming not only geographical but also cultural borders. Introduced species are referred to as “nature out of place”. When these become established, their competitive ability is expressed by designations like “swampers”. Finally, if invasive species run out of control they are seen as “taking over” [6].

Effectiveness of arguments
In the context of an EU policy, the general acceptance of alien species is not discussed at all. Also, it is taken for granted that negative effects on biodiversity can only occur to native species and native habitats as conservation objects (see quotation in the second balloon).

Reasons for taking action against IAS are primarily adverse impacts on all levels of biodiversity (intraspecific diversity, species, habitats and ecosystems). IAS arguments involving naturalness and cultural heritage do not find their way into European policy. They even do not appear at the science-policy interfaces, e.g. in agency reports commissioned by the EU on impacts of IAS. This is a potential cause for concern as scientists do make implicit value assumptions in their framing of the problems or in judging the adverse effects of IAS which are areas of policy or broader societal relevance.

The Convention on Biodiversity and also European policy until recently referred mainly to biodiversity as a conservation target affected by IAS. The 2014 Regulation on IAS was innovative insofar as it is one of a few documents that also mentions ecosystem services, human health and the economy as fields impacted by IAS. Conflicts arise in cases when invasive species that are of interest because of their economic importance for a land use sector are candidates for IAS of European Union concern. For example, the black locust tree (Robinia pseudoacacia) which was suggested to be listed as an IAS of Union concern is an important tree for Hungarian forestry. The list IAS of European Union concern is not part of the Regulation, so conflicts are shifted from the Regulation to the development of the list. It is still an open question how effective conservation arguments will be against economic interests.

Many arguments exhibit their strength because they are affirmative or paradoxically because they are implicit. The argument that IAS threaten biodiversity implies that more biodiversity (e.g., measured as species richness) is better than less biodiversity. This is not necessarily the case, e.g., often it is argued that addition of very common species or alien species to a community of species does not add to their value. Moreover IAS can, at least on local and regional levels, enhance species richness. However, this is affirmatively countered with the argument that non-native species are not part of biodiversity (see second balloon) without justification of that claim. The strategy of implicit and affirmative arguments is to a certain extent effective as it considers the valuation of IAS as a given and, instead of opening discussions leads to its closure and mutes sceptics.

Also use of alarming language and contrasting the good and the bad and identifying an enemy to fight against generally all serve to raise awareness, effective mainly in the (popular) press. However, among scientists who claim to be neutral and rather adhere to the power of facts than the sound of words, the use of such language is controversial. This shows that the acceptance of arguments and their framing depends very much on the recipient audience.

Sound, evidence-based arguments are not always those to which greatest attention is paid. Even (seemingly) scientific discussions switch from a dialogue of inquiry and persuasion to one of negotiation and bargaining where majority votes become important. For example the exchange in the literature in 2011, (“Don’t judge species on their origins” argue 19 ecologists [8] but “141 scientists object” [9]. Recognition of arguments in policy depends on power relations of those who are producing and those who are using arguments. The acceptance of arguments against IAS is surprisingly high also in other sectors than nature conservation. However, these sectors take into account a broader scope of arguments including also arguments in favour of IAS which in turn reduces the effectiveness of conservationists’ arguments.

Processes
Arguments for managing invasive alien species seem to have been very stable during the last 25 years. The main focus of arguments taken up by policy is on adverse effects on species, habitats and ecosystems. Only very recently arguments referring to ecosystem services and hence human well-being were found in policy documents. Although arguments against IAS referring to their economic impact and health effects were discussed in scientific papers already in the 1980s these arguments have not fallen on fertile ground for quite some time. With the advent of the ecosystem service concept, the number of scientific articles highlighting the contribution of alien and sometimes invasive species to ecosystem services rose. Another reason for taking up health and economic arguments is a strategic alliance with often potent partners in taking measures against IAS (such as EC Directorate-General for Health and Consumer Safety and EC Directorate-General for Agriculture and Rural development). However, arguments on ecosystem services which consider different land users’ perspectives have the potential to be used as counter-arguments to managing IAS to protect biodiversity.

Transferability
The scope of arguments in scientific papers is broader than in policy documentation on IAS which is a clear sign that not all arguments “count” when the context changes. The debate on IAS is important for arguments on biodiversity as it clearly shows different attitudes of humans towards nature which result in different value judgements on IAS. In this respect, the results from the IAS case are transferable to other fields of biodiversity policy. However, values clash heavily, so debates are often strongly heated and arguments often appeal to emotions rather than to relying on an evidence base that would provide grounds to justify a value judgement of IAS impacts.

For information on science-policy communication, see the SPIRAL project at http://www.spiral-project.eu/ .

This brief is a result of research carried out under the BESAFE project. This brief was written by Dr. Ulrich Heink and Prof. Dr. Kurt Jax at UFZ.