Context
A water catchment is defined as “an area of land through which water from any form of precipitation drains into a body of water” [1: p3]. The quality and quantity of water bodies within a particular catchment will be affected by both the management activities taking place in that catchment and the state of the natural environment. This will influence the ecosystem service potential for provision of clean water (water quality), but at the same time other ecosystem services will be affected in the process.

In order to obtain good quality drinking water, water companies (and indirectly their customers, via their water bills) pay for water treatment to remove pollutants from water. Catchment (river basin) management approaches offer potentially cost-effective solutions to water companies in terms of ensuring better raw water quality and therefore reducing the cost of water treatment, which in time will benefit the customers through lower prices.

For the last 10 years, it has been suggested that catchment management schemes could be a more cost-effective way of tackling diffuse pollution at source and could consequently provide financial benefits to customers. Catchment management approaches also offer secondary benefits to other stakeholders. For example, the restoration of peat bogs (within a catchment) will improve raw water quality and will also increase the environment’s natural ability to store carbon, reduce fire risk and enhance the protection of biodiversity [2].

In this case study, we refer to catchment management schemes implemented by water companies in their area of operation, in England and Wales.

Arguments
The study focuses on arguments for biodiversity in the context of catchment management. The arguments identified include:

Framing
The water quality argument takes the form of an appeal to knowledge and logic, in the sense that upstream catchment management schemes tackle diffuse pollution at source before it reaches a water treatment works and logically results in improved water quality. The argument is also framed by many actors in economic terms, as resulting in a cost saving. There is also a temporal framing as investments for the implementation of catchment managements need to be made now, but the benefits will not be realised until later.

Other ecosystem service arguments prevailing in this study include carbon storage and recreation. These arguments for catchment management take the form of an appeal to knowledge and logic in the sense that upstream catchment management schemes contribute to combating climate change through reduced emissions from rewetting blanket bog and supporting recreational activities, ecotourism, and interactions with the natural environment.

Arguments such as natural environment and heritage were also mentioned. Habitat restoration treatments contribute to enhancing and protecting the natural environment, and large scale landscape works such as moorland restoration contribute to improving visitors’ experience. These arguments are partly an appeal to knowledge and logic but also have some emotional framing.

Processes
A timeline of events related to the implementation of the catchment management approach is presented in Figure 1 and described below. The timeline shows the ‘coevolution’ of arguments for biodiversity and context over the past 10 years

Catchment management in policy
In 2003, the Water Framework Directive became part of the UK law and introduced the notion of river basin (catchment) management.

The notion of catchment management was referred to for the first time in a Price Review in 2004. As part of the 2004 Price Review, Ofwat allowed United Utilities (UU) to fund projects on their own land, in North West England, following support expressed by customers.

Sustainable Catchment Management Programme (SCaMP)
The first Sustainable Catchment Management Programme (SCaMP) was initiated in 2005 by United Utilities. The key argument used by UU was to improve water quality via changes to land management practices that would also bring other benefits such as an improved natural environment. This demonstration project was widely viewed as a success and additional schemes have been developed since SCaMP was first put into action. The implementation of other schemes has been supported by the science base increasing over time.

Policy developments
The Government’s water strategy for England (2008) outlines a “strategic and integrated approach to the sustainable management of our water resources, for the public water supply as well as for the provision of healthy ecosystems and the services they provide” [3: p17]. The strategy called for “an ecosystem approach action plan” where water companies are encouraged, “to work with farmers to tackle pollution at source” [3:p51].

Upstream Thinking Initiative
In 2009, Ofwat allowed the water company South West Water to invest on a land they did not own, which represented a major development. 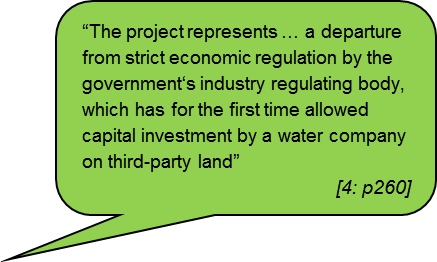 Land ownership can represent an issue in the implementation of catchment management; it is relatively easy to implement catchment management in some areas where the land is owned by the water company and in other situations it is more problematic and requires Ofwat to allow expenditures on third party land.

Economic regulator (Ofwat)
In the report “From catchment to customer” (2011) Ofwat mentioned changes to their regulatory approach. 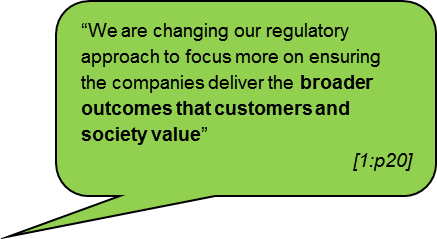 Water companies have for the first time to focus on delivering what customers themselves express as being important issues, including the delivery of safe drinking water and environmental outputs.

2014 Price Review
As part of PR14, water companies are now asked to provide evidence including:

Evidence of customer support for those schemes;

Approaches for dealing with risk and uncertainty in decision-making.

Effectiveness of arguments
This case study reveals the increasing effectiveness of arguments associated with ecosystem service values in the context of enabling the industry regulator to support water industry investments in catchment-level conservation projects. All of these arguments for biodiversity, including water quality, water and carbon storage, human health, heritage, recreation, natural environment, wildlife, and flood prevention may be regarded as having the potential to be effective because of their internal logic and coherence.

The improvement in water quality and delivery of benefits such as an increase in biodiversity and carbon sequestration, and a reduction in flood risks have been observed in some areas (from qualitative data) as the result of catchment management, e.g. Wessex Water (in South West England), United Utilities via SCaMP and South West Water with the Upstream Thinking Initiative; therefore catchment management schemes could potentially also deliver better water quality and other benefits across England and Wales.

In addition to water quality, Ofwat now also mentions environmental quality and climate regulation as arguments in support to catchment management approaches – achieving sustainable water is at the centre of their strategy. 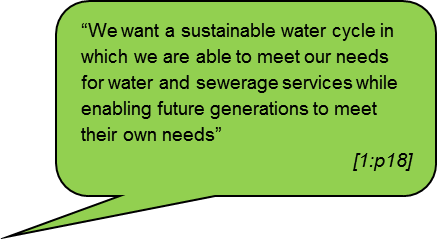 Over the past 10 years, there has been a change in design of the price review and regulation process, with Ofwat adopting a much more flexible approach to regulation; Ofwat are now considering that serving customers can mean more than only giving attention to prices – environmental quality is also important to customers and it is appropriate for Ofwat to take their preferences into account.

Transferability
Benefits of catchment management have been demonstrated in some areas. Examples of benefits are illustrated in Figure 2.

Some water companies might be motivated to invest in catchment management schemes subsequently to other companies’ success in implementing such programmes.

Since the catchment approach is novel and not yet fully established in the UK, its implementation currently depends on some key individuals pushing it and on a small network of people involved in catchment management and ecosystem services. Therefore, the overall resilience of the approach is quite low. There is a risk of failure / scandal associated with any one scheme, and a risk of contagion if that happens.

Looking for more information on effective arguments for biodiversity?

For information on science-policy communication, see the SPIRAL project at http://www.spiral-project.eu/ .

This brief is a result of research carried out under the BESAFE project. This brief was written by Dr Rob Tinch and Laurence Mathieu at www.eftec.co.uk. The full report is available on www.besafe.pensoft.net