Context
The case study was carried out in the Romanian Lower Danube River Catchment (RoLDRC) focusing on the Small Islands of Braila Nature Park (SIBr) area (Fig. I) – a remnant wetland that still preserves the biological diversity and the full range of ecosystem’s functions.

Different policies and management plans developed and implemented over the years in the RoLDC had a wide range of long term objectives including the development of waterway transport, flood control and power generation, irrigation, increased hydrological connectivity within the coastal delta, land reclamation for agriculture and nature conservation through conventional protection of particular endangered species/taxons at small scales. The policy goals in the RoLDC were slowly changed during economic transition and EU accession towards conservation of biological diversity, ecosystems and land-waterscapes; reduction of diffuse and point pollution and eutrophication; restoration of structural configuration of the landscape; sustainable use of ecosystem services; sustainable management according with international and European conventions, strategies and directives.

The case study comprises three components: i) identification and characterisation of arguments used for conservation, restoration and sustainable use of biodiversity, in particular in favour of designation and management of protected areas (types of arguments, arguers and context of use); ii) effectiveness assessment of used arguments; iii) level of transdisciplinary knowledge (including traditional knowledge) used in development and implementation of strategies and plans regarding management in the studied area.

Stakeholders of the study area include both individuals and groups of people who influence the management measures in the area – “influential stakeholder” – and those who have no influence, but are directly affected by the planned changes, and whose interests should be considered by the decision-makers. Three main groups of stakeholders were identified, who, depending on a given situation, can be considered either influential or non-influential:

i) uniqueness of the area arising from the rich diversity of landscape and species. The Danube River and the floodplain area encompass a large variety of ecosystems that are home for rare species of plants and animals, providing uniqueness and fragility of the area; the SIBr is defined by the existence of a unique and complex landscape diversity.
ii) natural importance of the area as remnant wetland from the large Lower Danube Wetland System (after 1960, RoLDC was deeply affected by landscape changes for agricultural purposes). SIBr is a part of the lost paradise that was once Braila Islands area/ the last representative area of the former marshes of Ialomita and Braila after their conversion into agricultural areas, remaining the only unembanked area.
iii) importance of protected areas for providing resources and services to local communities which are highly dependent on them; The first version of the management plan for SIBr Natural Park created an opportunity for the academic stakeholders to assert that SIBr offers resources and services to the local population, but they need to use them in the traditional ways (e.g. traditional fishing, farming) developed over time, that have no negative impact on the structure and functioning of ecological systems.
iv) compliance with national, European and international legislation for nature conservation. Designating the SIBr area as a nature reserve, Natural Park, Ramsar and Natura 2000 site required several specific legislative rules to be imposed. These constraining arguments reduced the number of conflicts related to overexploitation of natural resources within the area.

Framing
A summary of the frequencies of the different argument type categories put forward by each of the main stakeholder groups is provided in Table 1. 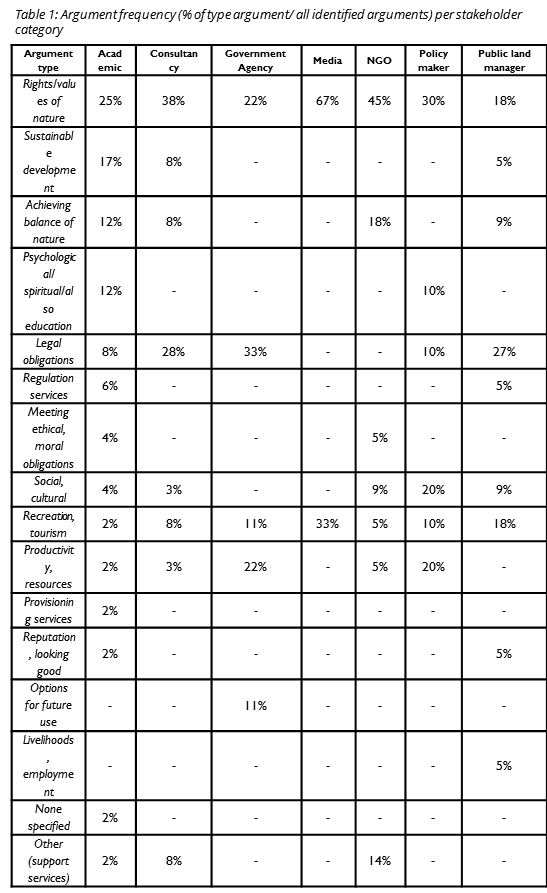 Arguments
The analysis was centered on the argumentation in events related to:

Arguments for Achieving balance of nature were issued by local and national academic stakeholders and retransmitted by local NGOs and public consulting firms in a wide range of events (e.g. promoting the national and international protected area statute for SIBr, establishing the biodiversity conservation needs for SIBr in local conferences, elaboration of local development plans, demonstrating the negative impact of human activities on the natural capital or sustaining the importance of activities for ecologic and economic resizing of Lower Danube Floodplain).

The arguments that reflect the ecosystem services concept (e.g. provisioning services, regulation services) were issued by the academic sector, in order to provide scientific consolidation for receiving the Natural Park statute (2000); after its designation, they were transmitted by local public land managers and government agencies, in order to obtain the support of local population in the development and implementation of the Management Plan, by highlighting the potential direct or indirect benefits they can obtain.

Social/ cultural/ heritage/ collective well-being and welfare arguments were transmitted by policy makers, local public land managers, NGOs and academic stakeholder or consulting firms in order to present the diversity of the cultural heritage, an invaluable genetic and ecological treasure – the conscience of a history represented by the area.

Arguments regarding Reputation, looking good were scarcely formulated only by academic and public land managers, when referring to specific identity that contribute greatly to increasing the attractiveness of this area for the tourists and for investors.

Ethical/moral views were issued both by NGOs and academic sector, formulated like: one species’ extinction is irrecoverable or birds belong to the whole world.

Processes
At first, various arguments (e.g. rights/values of nature, sustainable development, achieving balance of nature) were issued by the academic sector, with different aims, though mainly for raising awareness on the importance of the area and on the potential benefits that its conservation and protected area status could bring. These scientific arguments were adapted and further transmitted by NGOs, through the media, in order to increase public awareness toward environmental issues, with a high persistence over time. However, over the timeline, the same arguments, placed in different contexts and with different purposes may change their characteristics (e.g. from arguing for ecological restoration 1993-2002- to raising awareness of public and local authorities for the development of a management plan 1998-2000 or, at national level, for underlining the importance of SIBr for tourism in the context of development the Strategy for fishing area 2010-2012). The arguments may become more or less complex, containing more or less scientific information, conditioned by the nature of receptor, their education level and/or nature of interest (local population, authorities, NGOs, media, academic sector). They may even change their type, from showing the intrinsic value of the area without any direct benefit (in SIBr area, an ecosystem mosaic can be found and needs to be protected) to being more pragmatic (the multitude of ecosystem types play a key role in maintaining the structural and functional diversity of SIBr).

Effectiveness
An argument is considered to have an effect when, after being placed in one given event related to a certain level of the decision making process it changes a behaviour or changes another arguments used in another event.
The effectiveness of arguments within this case study was analysed following the scheme below:

Long term observation and analysis of arguments used in SIBr showed that arguments that refer to uniqueness and fragility of the area, as well as balance of nature and recreation registered a high persistence over time. Similarly, arguments showing the role of the area as fish spawning site and the general importance of wetlands maintained high profiles. These types of arguments, enriched with those provided by the Romanian Academy regarding the importance of the area made a very strong contribution to final effectiveness.

Arguments related to rights of nature and balance achieving diffused from academic debates to development and implementation process of management plans in the studied area.

Same type of arguments were used at several levels and sometimes they crossed levels.

Legal arguments (imposed by protected area regulation), issued at national level had a higher effect at local level and mitigate the level of resource generated conflicts. Arguments emphasizing direct benefits were effective both at local level (for local population, as well as local authorities when implementing the management plans or reconstruction works) and at national level (in the procedure for designation the Natural Park statute).

Transferability
Within the case study, NGOs played a prominent role in transferring arguments: arguments first issued by the academic sector were transmitted further by NGOs (especially as emotional appeals) through the media, and sought to raise awareness among decision makers and the general public.

Many of the identified arguments were taken from the academic sector and transformed by NGOs, being expressed in a metaphoric manner (e.g. when a man dies, it’s pain, when a species disappears, it is irretrievably gone and the world is smaller). Thus, arguments were easily transferred to and received by general public and decision makers who had the opportunity to influence policy makers through e.g. mass-media channels. All of this enlarged the spreading and dissemination of scientific findings, and, together with traditional knowledge from the local population, contributed to improving and  raising the efficiency of the decision making process. This sustained a better use of natural resources and ecosystem services in the area along with the support and knowledge from the local population.

Arguments that proved to have a high efficiency in the studied area could be a good example to other similar areas – either from the point of view of landscape characteristics or from the point of view of national/international statute/recognition; however, there must be said that, since there do not exist identical areas/situations/contexts, arguments should always be adapted, reformulated in order to meet specific conditions, although general characteristics, proved to be efficient, can be followed.