Context
Natura 2000 is a network of nature reserves across the European Union. It is designed to protect species and their habitats. Managing the network so that its nature can continue to flourish and be enjoyed comes at a cost, for instance to restore particular habitats which support breeding birds or to maintain hiking paths and information panels for visitors. There are also indirect costs: many Natura 2000 sites have to deal with conflicting socio-economic interests of various stakeholders, including farmers, conservationists, public authorities, or visitors. They mostly have diverging visions on the use of Natura 2000 sites. Bringing these stakeholders around the table to make a convincing case for nature protection is always a challenge.

Our case study analysed different Life projects to find out what arguments work best to convince different stakeholders with an interest in a Natura 2000 site. Life is a fund of the European Commission to support restoration activities in Natura 2000 sites [1].

Arguments
Our study found a rich variety of arguments used to make a case for nature protection in Natura 2000 sites. The inherent argument that nature has a right or value of its own reappeared in almost a third of the of the Life projects included in the first screening phase. People also often underline the importance of conservation without going into detail (10% of the projects screened). Natura 2000 sites are also related to the cultural heritage of a region which is seen as important to protect.

Several projects also stress the importance of Natura 2000 sites for their contribution to the regional economy (5%), and in particular, to help achieve a more sustainable development (7%).

Framing
Our research question about the effectiveness of arguments used to protect and conserve biodiversity in Natura 2000 sites is in essence effect-oriented. We wanted to understand what sort of arguments Life project managers encountered during their contacts with stakeholders and how effective these arguments are in persuading stakeholders.

Therefore, a relatively simple, effect-oriented communication model was chosen to guide the analysis. It is building on the classic understanding of communication as a linear process (also known as Lasswell’s model): Who is communicating which argument under what context to which audience with what effect.

Processes
Establishing a Natura 2000 site and turning it into a functional reserve for threatened habitats and species is a process that takes several years. It can thus be expected that the type of arguments used in Natura 2000 sites changes with implementation process but this was not investigated in our case study.

Effectiveness
Our study found that instrumental and non-instrumental arguments were very differently perceived by each stakeholder group. Instrumental arguments appeared particularly effective for commercial users, where economic interests stood against the conservation activities. But also stakeholders without commercial interest tended to be more receptive to arguments that implied a benefit for themselves or their communities, such as recreation or a cultural value. For public services economic arguments can be convincing as well and thus also very effective.

Overall the study showed a mixed picture, where different individuals among the same stakeholder group could be persuaded by very different arguments (Figure 1). This implies that a mixed argumentation strategy may be optimal in most cases. 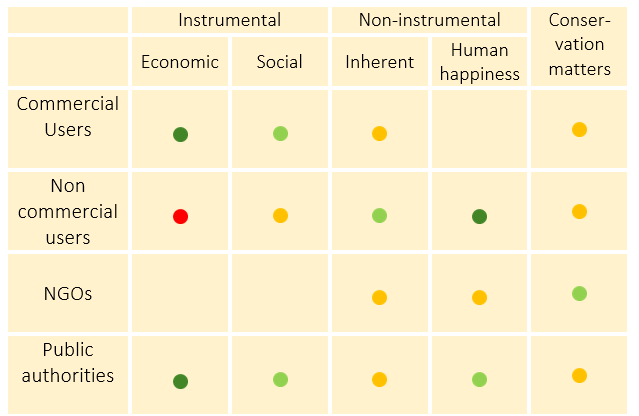 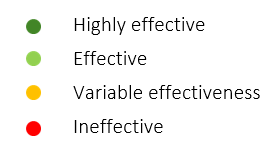 Figure 1. Summary of effectiveness of the argument types per stakeholder group based on 14 interviews. The empty cells indicate combinations that were not encountered in our study.

The socio-economic context appeared to have an impact on the effectiveness of arguments. Several cases gave suggestive evidence of the importance of the relationship to nature or the species in question in explaining the effect that an argument had on stakeholder groups. In Life projects where the project developer reported that a stakeholder group had a solid knowledge or an emotional connection to the natural environment in question, it seemed that intrinsic arguments were more effective. However, where there was no strong previous relationship with nature, several project managers reported to have succeeded in fostering such an understanding through activities that made stakeholders engage with and in nature, e.g. through guided tours.

Transferability
This study involved a variety of different countries and contexts across the European Union, and addressed the broader reactions within Natura 2000 argumentation. Thus many of the findings are generalizable and transferable to other situations. For example, the study provides insights into the question of the degree to which instrumental arguments are ultimately replace non-instrumental, ethically motivated arguments. The findings indicate that the moral base of biodiversity conservation is usually an accepted paradigm with which stakeholders do not generally disagree. However, the acceptance of this norm was in most cases not sufficient to motivate action against economic interests. In these cases instrumental arguments came into play to create a business case. Instrumental arguments, including ecosystem services, are hence not replacing but adding to non-instrumental arguments to guarantee political feasibility.

Also, our study found that a consensus-seeking approach is a key factor in achieving any conservation at all. Although a consensus based approach changes the actual socio-economic and ecological outcome of a project, it does signal to the different stakeholders a certain degree of influence over policy outcomes and thus, can help to create trust. Hence, consensus-seeking practices should also be understood as one of the mediating factors for stakeholder persuasion.

This brief is a result of research carried out under the BESAFE project. This brief was written by Joachim Maes, Joint Research Centre (Ispra, Italy).