Intended audience
The current policy brief is targeted at anyone wishing to make more effective arguments for biodiversity conservation, including:

Tailoring arguments to the audience
The 13 BESAFE case studies and stakeholder discussions highlighted the importance of using the right arguments, tailored to each target audience. The effectiveness of different arguments depends heavily on who you are talking to, e.g. landowners, government ministers or local citizens. When there is a variety of stakeholders, a mix of arguments is, therefore, expected to be most effective (though care can be required to avoid loss of trust, if advocates are seen as giving contradictory messages to different groups). A combination of arguments also makes it possible to show more benefits. But to use the right arguments requires good preparation and analysis, and awareness of contextual factors.

Figure 1 shows a number of aspects of tailoring arguments to the audience. Firstly, it is important to transmit arguments in a common language that is easy for the audience to understand. Although academic and technical audiences will appreciate the use of precise scientific language, most other audiences will need clear and simple arguments that are free of jargon. The use of accessible presentation methods, including visual imagery and simple diagrams, can help to get the message across.

Perhaps the most important aspect is to frame arguments to match the specific goals and interests of the audience. Although broad, general arguments can reach wider audiences, arguments become more effective when the focus is on specific content, linked to the personal experience of the receiver. Figure 2 shows a framework developed by Benford and Snow [1] in which effective arguments must be salient (relevant) to the central goals, the direct personal experience and the wider cultural context of the audience, as well as being supported by credible evidence and delivered by a trusted source of information. For example, a case study of the Danube River Basin in Romania found that the academic community was perceived as a credible source of evidence, but there was a need to explain their arguments more clearly using a common, accessible language. 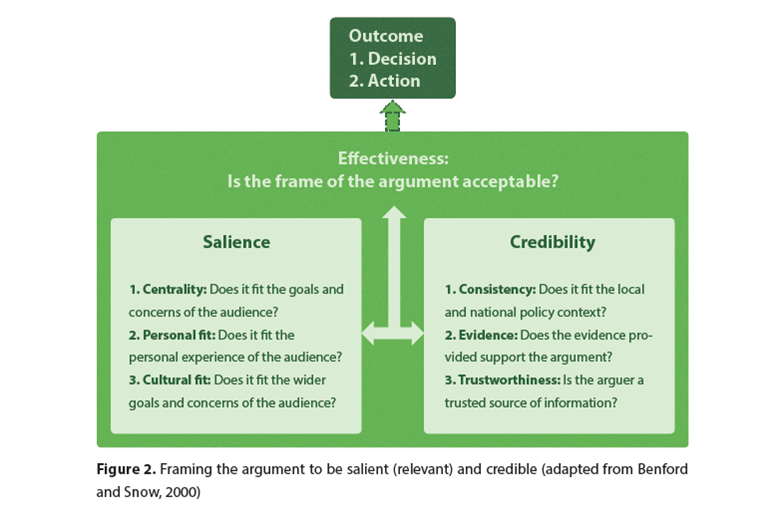 It is particularly effective to frame arguments positively by highlighting specific benefits for the target audience (see thematic policy brief on ‘Selecting the right Framing for your goal’). This often means that the main focus may not be on biodiversity conservation, but on other carefully chosen economic, social or environmental goals. For example, in a study of various local biodiversity projects as part of the UK Biodiversity Action Plan (see the case study policy brief on ´Arguing for biodiversity in a Local Biodiversity Action Plan area, UK), successful arguments that were closely targeted to the personal and professional interests of the decision-maker included:

strong>Personal and emotional arguments
Although many people assume that policy-makers will be influenced mainly by rational, logical arguments, participants at a BESAFE stakeholder workshop stressed that biodiversity is also about emotion. People often identify closely with species, habitat, landscapes and other aspects of biodiversity, and arguments that successfully appeal to the emotions can be powerful. Even stakeholders with a clear economic interest, such as farmers, are sensitive to this type of argument to a certain extent, especially with back up from ‘what is in it for me’ arguments such as those focusing on economic or ecosystem service benefits. Many arguments can be presented either emotionally or rationally, depending on the background information, figures or images provided for the stakeholders.

Arguments that enable people to feel personally involved are also very powerful, such as by pointing out that people can use their gardens to provide habitat for bees, or encouraging schools or villages to ‘adopt’ a species. Personal relationships between the arguer and the audience are also highly influential (see the thematic policy brief on ‘Arguments in a decision making process: trust, credibility and dialogue’), and the presence of a highly committed and enthusiastic person can make all the difference to the success of an argument.

Difficult audiences
Certain audiences can be hard to reach, because they may feel threatened by conservation efforts. To reach these audiences, it can be useful to work with coalitions and collaborative groups, to repeat arguments consistently over time, and to use a wide range of arguments, including those emphasising benefits, and to work on building trusted personal relationships. This strategy can take time, but can eventually reap success. Stakeholders cited the example of salmon fishers and whisky producers in the UK, who were at first against the introduction of Natura 2000 protected areas, but eventually changed their minds when they realised the multiple benefits that conservation held for them.

Usefulness
Tailoring arguments to the audience can result in more effective arguments for biodiversity conservation, with potential benefits that include:

Transferability
The general lessons learned on how to tailor arguments to the audience should be widely applicable and transferable. However, the exact choice of which arguments to use and how to frame them will, of course, vary from case to case, as that is the message of this policy brief.

Looking for more information on effective arguments for biodiversity?
For more BESAFE results, including separate briefs focusing on other case studies and various aspects of argumentation, see http://www.besafe.pensoft.net[ref BESAFE toolkit].

This brief is a result of research carried out under the BESAFE project. This brief was written by Nicoleta Geamana, Alison Smith, Pam Berry and Adina Stanciu. Further information can be found in the public BESAFE deliverables (D2.2, D2.3, D3.1, D4.1), and briefs focusing on other case studies.